As a music video producer, I have picked up a few key pieces of knowledge in my journey so far through the industry. One thing that is clear to me is the fact that there is no real certain path to fame. The best thing you can do as an artist is to constantly come out with new GREAT stuff. The problem is that small budget’s tend to get in the way of artist’s being able to come out with creative, professional material constantly. So what are artist’s supposed to do? It’s a depressing en devour to say the least. Thankfully for the artist on the come up, I have a few suggestions that will help.

I will use a recent album project that we helped market through video to serve as example for the following tips. Artist Cash O’Riley was looking to create a new promotion on an already existing album. He wanted to promote the single called “Jackson County Jail”. His goal was to grow his loyal fan base, and sell additional merchandise. Mostly he wanted to give back to all of his fans and supporters in a creative way. Music Video are free for your fans to watch… That’s the best part.

A lot of artist’s come up with great idea’s for album’s, but it’s important to not loose the creative steam at that point. For your next album, first create an Image of yourself or the album that you will sell with everything you do. Don’t stop at the album, come up with a style and merchandise that is marketable to the masses. You use your style and the merchandise to to bring attention to your album, as the album in turn brings attention back to the merchandise and your style. Once that cycle gets started, you will begin to progress. Don’t sell out, but find things that are cool and relate to your style to help build your image. Fan’s should be excited as they describe your style to friends.

Cash O’Rliey already had a distinct style and image. He is often grouped with the genre “Rockabilly” but he is much more than that. Cash has created words that are unique and directly relate to his style. For example when describing cash I use words like “Hellbilly”, “Onesome Outlaw”, and phrases like “Stewed & Screwed”. 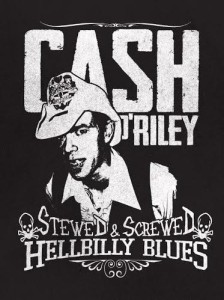 Coming up with merchandise that will actually sell is harder than it appears. First, consider who your target audience for the album is. Once you have identified your ideal audience you can begin the process of design. Most performing artist’s come up with shirts that glorify there name in big letters on the front. The problem with this, is the fact that not every artist is known or glorified yet. So in reality, the shirt sales for that artist will be low and they will stay at a stand still with fan growth.

What you want to do is come up with a design that people will enjoy wearing regardless if they are a current fan or not. For example, being from Detroit I may be more willing to purchase a cool shirt with a Detroit skyline on it. Although I wouldn’t have purchased the shirt to support you individually, If your name happens to be written some where on the shirt I may just look you up. It’s all about using creativity to gain interest. It’s important that the image can directly relate you to your fan base.

When creating this shirt design Cash O’Riley and I thought about what type of image is marketable and directly related to him as an artist. For Cash it was easy because he designed and built a functioning oil can guitar for his performances. I took the image and made it something that would be fun to wear whether you knew of Cash O’Riley or not. It’s designed to look as if you are holding the guitar.

Promotion of your image is very important. Your image should be able to be easily represented through photography, video, and music. It’s important that your image is relate-able to many other easily marketable things. The more images we can relate to, the easier it is to find subjects that resemble the same style we try to capture. The world begins to see you everywhere…

Because Cash chose the song “Jackson County Jail” as the theme of our promotion, it was fairly simple to find locations for our video shoots. Secondly his 67 Chevy Bel-Air and oil can guitar serve as great props that represent him individually and are quite helpful in creating marketable promotions. 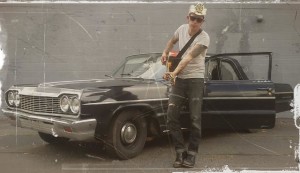 When creating an image for an artist or album, there is no better way to present yourself to the fans than a music video. People base so much opinion on an artist depending on how they depict themselves in video. For a new artist it is the most important move of your career. It’s a matter of how you want to introduce yourself to new fans. How do you want them to view you and your style. If you have video’s out that you believe misrepresent you or are a low quality it’s actually more beneficial to delete those videos asap. A low quality video speaks volumes of an artist’s integrity. Everything that you put out represents you. So… if your video is no good, than you in turn must be no good. Only be represented professionally and with proper planing.

With all of Cash’s talent and stage presence, making a music video with him was a delight. Check it out!

The entire article above sounds terrifying to a new artist because it seems expensive. I wont lie, it is… Don’t let it scare you. Use the fear to keep you on the right track for pre-planning. Don’t make any move until you have thought of your entire marketing plan. Use this article to come up with a plan that you can take to sponsors. It probably sounds crazy to think that anyone will just give you money to create. In actuality it’s a very normal way for business’s to further there image in a positive way. If sponsorship doesn’t work, save up some money. Pay for a nice music video, have a release party for the video at an inexpensive but nice venue with good sound. You must at this time introduce your image… Let the new amazing video play, perform your heart out, and present your very cool and marketable merchandise. If that doesn’t work, rinse and repeat. It can sometimes take more than one try to get famous. Nobody said this way easy…

Introducing Our new drone AKA The Falcon
Scroll to top